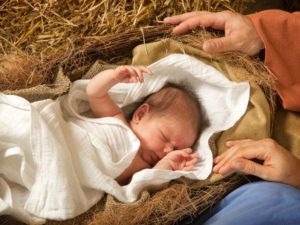 It’s that time of year when surely everyone, regardless of beliefs or background, can’t help but hear something of the birth of Jesus. This year, we challenge you to take a real look, to not leave the baby Jesus in the manger but to find out the real message and hope of the Bible.

The nativity scene is a central feature of much orthodox religious observance of Christmas. The shepherds clustered inside the rough stable around the baby Jesus asleep in the straw whilst Mary and Joseph look on adoringly. Little lambs and cows usually feature as do Wise Men bearing costly gifts and angels hovering above. Variations on this theme abound as it tries to depict every feature of the story of the nativity.

On the whole, apart from the obvious assumptions (for example, are we actually told that Jesus was sheltered in a stable, or that the Wise Men were three in number and that they showed up at the same time as the shepherds?) the nativity scene is a rather sugary but harmless visual aid to teach the reason for the season.

But there are other assumptions that can subtly undermine the message that lies behind the Saviour of the world beginning his life in such humble circumstances. For example, the assumption that Jesus was laid in the manger (which, by the way, could have been little more than a roadside feeding trough) because the poverty of his background meant that his parents could not afford anything else.
Look closely at what the Bible tells us:

‘So it was, that while they were there, the days were completed for her to be delivered. And she brought forth her firstborn Son, and wrapped Him in swaddling cloths, and laid Him in a manger, because there was no room for them in the inn.’ (Luke 2:7)

Because of the census taking place, large numbers of people were on the move and accommodation was limited. How did Joseph and Mary know that there was no room for them at the inn unless they had already established the fact? And why would they try for a room if they had no money with which to pay for it?

What relegated Mary to having to give birth possibly outdoors and bedding her child down in a manger was not that they had not the means to pay, but that there was no room in the hostel in Bethlehem. Obviously, after the crowds had moved on they would book into better accommodation.

Jesus was born in harsh conditions because of the failure of the townsfolk of Bethlehem to make room for his mother in her obvious condition of approaching childbirth. Whilst finance might have been difficult, (we know that the sacrifice they offered was the smallest possible) this would be expected when folk are displaced en masse from their home environment. But by the time the Wise Men from the East arrived, some eighteen months to two years later, the family were living in a house, so clearly, they had acquired some means to buy or rent.

Joseph was a carpenter – a skilled artisan whose abilities would be in regular demand. The family would not be poor.
What the conditions of Jesus’ birth really teach us is the vital question; ‘do we make room for him in our crowded and chaotic lives?’

This is a consideration that can really make a change where it matters – not in the world around us but in our hearts. Making room for Jesus is something that can affect the way we think and behave. In our frantic world, stopping to consider Jesus’s teaching and example can admit a sense of peace and security into our fragile existence because Jesus makes sense of life. Leading by personal example He famously explained;

‘He who finds his life will lose it, and he who loses his life, for My sake, shall find it.’

Our world pressures us into finding a lifestyle that usually involves consuming mass-produced goods and services. We struggle to keep abreast of the constant demands on our time and resources, especially at this time of year. Unless we do so, we are pressured into thinking we are missing out.
Jesus counsels the opposite. By making room in our lives for Jesus, learning from His life, we find something more enduring and precious than anything life can offer. We find peace, serenity and above all purpose to life.

So, don’t leave that baby in the manger and move on with nothing more than a vague sense of what it might mean. Let next year introduce you to the Saviour of the world who alone can release you from the treadmill of life and go with you to a realisation of life far beyond you can imagine.