“The nation of Israel are a wonderful witness to the Living God. Back from the long dead. But although as a nation they thrive, in God’s sight they are just lifeless bodies, waiting for the One who can bring life. The Lord Jesus Christ will return to save the nation in their darkest hour and in Him they will find abundant life.”

Whatever horror movies might depict; zombies staggering around, wall-eyed living dead, skeletons grinning evilly – we know that this is the stuff of make-believe. Life requires heartbeat, brain function, muscles and a multitude of complex interdependent systems to continue. Once a human being has been dead for any length of time, the recollection of what they once were – warm, living flesh and blood, able to move of their own accord, speak, listen and function as a living being – becomes increasingly difficult to visualise let alone become a reality.

So the question put to the Prophet Ezekiel, author of one of the longest prophecies of the Old Testament, is a strange one.
Confronted with a vision of dried, scattered bones strewn around a valley, Ezekiel is asked; 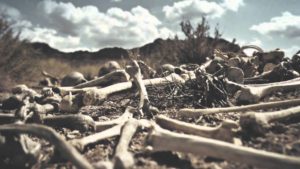 Had the question been posed by anyone else, Ezekiel would undoubtedly have replied; ‘Don’t be ridiculous!’ or words to that effect. The bones were not only very dry; they were dispersed all around the valley floor. Thousands of bones – it would take a team of forensic scientists years to assemble each skeleton together again and the end result would be no more alive.

But Ezekiel is asked the question by Almighty God for whom nothing is impossible. So Ezekiel elects to play safe:

The rest of the vision is astonishing, terrifying even. Upon being commanded to speak to the bones, there is a great rattling and an unseen force drags the desiccated remains together, bone to bone until each is matched to its skeleton. Then the same force restores muscles, tissues, eyes, blood vessels, organs and skin to each so that now Ezekiel is looking upon a great army of dead men.

Like every prophecy in scripture, you cannot be slap-dash with the details. Look at what God said would happen:

“I will put sinews on you and bring flesh upon you, cover you with skin… (verse 6)

Which is the point we have reached. Then it continues:

…and put breath in you; and you shall live. Then you shall know that I am the LORD.”

A two stage process. The assembly of a chaotic disarray of bones into ordered but dead bodies is followed by the breath (or Spirit) of God energising and resurrecting them into a mighty army that stands upright.

As prophecies go, this one is strikingly clear. Its interpretation is found in the next few verses.

Then He said to me, ‘Son of man, these bones are the whole house of Israel. They indeed say, ‘Our bones are dry, our hope is lost, and we ourselves are cut off!’’ (verse 11)

Taking a very simple viewpoint of this whole episode we can say with confidence the following:

‘that I am the LORD, when I have opened your graves, O My people, and brought you up from your graves.’ (verse 13)

Could there be a clearer sign for our day and age? In the course of eighty years the Jewish people have gone from being the ragged, emaciated survivors of the concentration camps to amongst the most advanced culture and nation on earth. Industry, expertise, ingenuity – these are the hallmarks of the collective nation called the State of Israel – a concept that for nineteen centuries was little more than a forlorn prayer on the lips of the faithful.

What does it mean, though, when God declares:

‘I will put My Spirit in you, and you shall live, and I will place you in your own land’?

The answer is found on the lips of the greatest Jew of them all;

The nation of Israel are a wonderful witness to the Living God. Back from the long dead. But although as a nation they thrive, in God’s sight they are just lifeless bodies, waiting for the One who can bring life. The Lord Jesus Christ will return to save the nation in their darkest hour and in Him they will find abundant life.

An unseen force did this, just as it assembled the bones in the vision. A force that defies human logic, crushes all opposition and relentlessly achieves its aim. The force is God. As the LORD said to Jeremiah:

So it remains for Israel to truly live. Presently they exist, clinging on to their precious tract of land surrounded by fierce and implacable hatred. But God has decreed that one day they will recognise Jesus as their Messiah and live in peace and harmony with their Creator in the land that God promised to their first ancestor, Abraham.

‘Then you shall know that I, the LORD, have spoken it and performed it,’ says the LORD. (verse 14)

Dead bones don’t come to life again. It is a ridiculous idea. But we are talking about the God who created the Universe. He can, and does what He likes. He can give you true life as well.

Come and find out more: 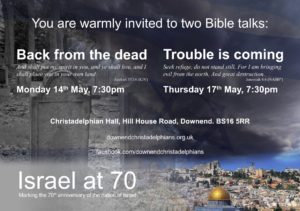